Religion on the Public Square-On Nativity Scenes, Mithra, and more.

I think that I'm kind of an anomaly in Pagan circles, I believe that religion "on the public square" is a good thing.  I'm not necessarily opposed to the idea of Nativity scenes on public property, as long as every other faith has a chance to put their faith on display as well.  The baby Jesus in the manger is fine by me, as long as it's flanked by a menorah and a sign that says "Happy Yule."  Unfortunately, when you put religion on the public square, you get more than just shared Holiday Greetings, you often get deliberate antagonism.

This was vividly illustrated in a recent Associated Press story about the displacement of several Nativity/Christmas scenes at a coastal park in Santa Monica California.  The park allows for twenty-one displays, traditionally fourteen of them have been given to local churches who tend to put up Nativity scenes (they are churches, I can't say I'm surprised). This year the system changed and the twenty-one caged display areas were subject to a public drawing.  Out of the twenty-one available spots, two went to Christian churches, one went towards a Menorah, and the rest went to two atheists (one person can request up to nine spaces, two people got nine spaces a piece).  There are displays in three of the eighteen spots claimed by the atheists.  This angered a lot of churches, many of which had been putting up displays at this particular park for over 57 years. 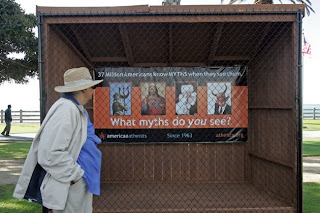 If you are wondering whose side I'm on, I'm on the side of the Christians. I have no trouble with atheists wanting to put up a display over the holidays, but I do think it's really a dickish move to claim a bunch of space with the intention of not doing anything with it.  There are no rules requiring them to give back their unused spaces either, so the spaces just sit there, empty.  This is obviously a petty move by some small minded people, and it makes me angry.  I have many atheist friends who behave rationally, but people like this, who just go out of there way to mock religion, I have very little tolerance for.  Remember Pagans, these are people who are going to make fun of your beliefs as well.  I know a lot of you out there tend to sympathize with atheists, and we often have common cause, but not in cases like this.

It's not just the unused spaces that bothers me either, it's the way atheists like this shape their message.  As you can see in the picture above, the banner says "What myths do you see?*"  That's not a holiday greeting, and it's not going to make a Christian suddenly say "Oh, Jesus is a myth?"  It's designed to provoke, and it's certainly out of line with what many of us think The Holidays are about.  What's wrong with a sign that simply says "Happy Winter Solstice" or "Happy Holidays?"  Why does it have to be a sign that belittles someone else's beliefs? 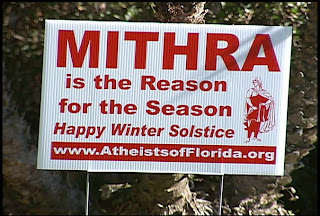 Last year in Florida there was a yard sign battle between Christian groups which were distributing "Jesus is the reason for the season" signs and an atheist group which was distributing "Mithra is the reason for the season."  Both sides were wrong of course, Saturnalia predates both the myth of Jesus' birth and the myth of Mithras' birth.  I know many Pagans get a kick out of such signs, but the atheists who are displaying them aren't endorsing Paganism, they are using those signs to mock both Pagan and Christian beliefs! 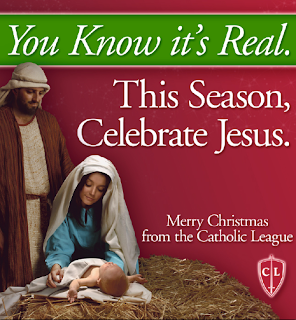 The Christian reaction can also be a bit ridiculous.  Last year the Catholic League put up a bunch of "Jesus is the Reason" billboards in various parts of the country to battle the atheists.  Instead of saying something nice the tagline is "You Know it's Real," which is especially hilarious given the depiction of Mary and Joseph.  It's good to know that Mary is still 100% European, and a full grown adult, because in Palestine two thousand years ago only twenty-four year old women were having babies.  (Mary probably would have been fourteen, people just got married early back then.)  If you are going to tell me that something is real, at least get your basic historical facts straight.

Personally, I'm well aware that the majority of trappings in the Nativity story are Pagan.  Miraculous conception?  Pagan.  Celestial events at birth?  Pagan.  Born in a cave?**  Pagan.  Miracles like talking animals surrounding the birth?  Pagan.  Pagan Astrologers giving the baby presents?  Perhaps not Pagan, but it features Pagans!  Pretty cool.  I tend to only see my own faith reflected in most Nativity scenes.

The best way to deal with the Holiday Season is not to over-react.  I wish more people would look for the things we have in common instead of the things that separate us.  I disagree with a great many things in the Bible, but I do agree with "Do unto others as you would have them do unto you."  As a Pagan if I got some public space for The Holidays, my message would simply be "Happy Yule" with a Christmas Tree.  Yule is our word, and so's the tree.  Why start a war?

If I were an atheist and I wanted my beliefs respected, perhaps I'd use all the display space I received in Santa Monica to tell the true story of Christmas, that it's a holiday that has evolved from many different traditions.  If you want someone to come around to your point of view, try doing something other than making them angry.

I love the Holiday Season, and I'm one of those idealists who thinks that it's something that can unite us: Christian, Pagan, Jew, and atheist alike.  Instead of uniting us though, the Holidays are always co-opted by loud fringe groups on both sides who simply want to use it for their own purposes.  Atheist groups which put up signs saying "Why myths do you see" aren't trying to unite anyone, and neither is the Catholic League.  Why we have to fight during one of the loveliest times of the year will always be a mystery to me.

*There's a lot of bullshit in that banner too.  Certainly the birth narratives of Jesus belong in the realm of myth, but the majority of scholars think he was a real person.

**The New Testament says Jesus was laid in a manger, it doesn't say he was born in a barn.  A lot of early depictions of the Nativity have the little guy being born in a cave.
at 3:24 PM