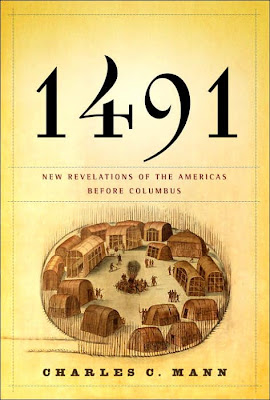 In preparation for Charles C. Mann's 1493: Uncovering the New World Columbus Created I've been re-reading 1491: New Revelations of the Americas Before Columbus in preparation. 1491 is one of my favorite (and most borrowed) books, and even on my fourth or fifth go-through it remains captivating reading. 1491 is one of those magickal books in my library; always engrossing, always illuminating, and always present. There are lots of books in my library that read like relics from a distant era, while only being four or five years old (surprisingly, "history" can change quite quickly), my favorites still feel "new" even after the ten year mark.
Out of the five books on this list, 1491 might be the most important one, just because it's the most jarring. For centuries we were taught that the "natives" Columbus encountered in 1492 were "primitives," not on an equal intellectual footing with their European invaders. You know where I'm going with, Mann demolishes that myth, taking it to the woodshed so to speak. Instead of a primitive society, Mann paints a picture of advanced, intelligent societies equal in most every way to their European counterparts, or at least as close as their environment would allow.
Mann is not a scholar, he's a journalist, but he uses that skill to take his readers into places not generally accessible on Amazon.com. In a lot of ways, he's the great synthesizer; taking journals worth of complex history and field work and turning them into a readable and completely understandable narrative that obliterates what we were taught in high school. This book isn't important because it destroys the myth of the "noble savage*," it's important because Native American culture is a part of the world's history.
There's far too much time spent talking about Sumer and not enough on Norte Chico. Without the achievements of the Native Americans it's doubtful our "modern world" would even exist today. Most of our diet, hell, most of the world's diet, is due to the greatest agricultural engineers the world has ever known, the Native Americans. Mann chronicles their accomplishments, architecture, diverse cultures, and history with an unparalleled touch.
(Mann's book is based on an article he wrote in The Atlantic Monthly, you can find it by clicking here. I actually have a copy of that article in a binder full of articles I deem important.) 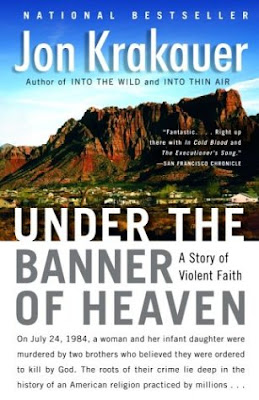 Jon Krakauer's Under the Banner of Heaven: A Story of Violent Faith is almost two books in one. The first "book" is a look at the fringe, violent world of Mormonism, told through the eyes of convicted killers Ron and Dan Lafferty. The second book is a mostly sympathetic look at the rise of Mormonism. If you've ever wondered what goes on inside of a Mormon Temple, Krakauer does a pretty good job of answering it.
I know that this book has taken a lot of hits in the Mormon community for its allegedly unflattering look at the Modern Day Saints, but I'm not sure that is entirely the case. Krakauer paints at times a sympathetic picture of a persecuted people, and I always come away from this book with a mostly positive view of Joseph Smith (the founder of Mormonism), I say mostly positive because the facts reveal a flawed human being, but hell, most of us are.
The most flawed human beings in the book are obviously the Lafferty brothers. Not just flawed, but nearly psychotic, and some of the jail house interviews are downright chilling. On his journey through the backwoods of Mormon Culture (un-sactioned by that Mormon Church down the street from you) Krakauer explains how an unyielding interpretation of faith can lead to violent action. As the most successful "modern religion" the pains, slings, and arrows of the early Latter Day Saints are similar to some of those in Contemporary Paganism. Knowing what alley ways to not go down is always useful information to have. 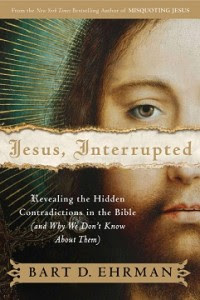 Bart Ehrman's Jesus Interrupted is not ground breaking in any way. In some colleges it might serve as an introduction to the New Testament, because the information in it is pretty standard stuff. What makes it a favorite of mine, is how easily accessible that information is, and how well presented it is. Things that I tend to take for granted: Paul only wrote seven of the New Testament books with his name on them, The Gospel of Mark was written around the year 70 CE, are downright foreign to some people. In Jesus Interrupted Ehrman has created a primer for anyone who wants to truly understand where Christian scripture came from.
As I write for a predominantly, but not exclusively, Pagan audience, you might be wondering why a book about Christianity is important. Well Christianity remains a dominant force in our lives, culturally and intellectually. The things done in the name of the Apostle Paul or even Jesus when those individuals never said or wrote those things is important information. I don't like Interrupted because it tears down Christianity, I like it because it returns the focus of Christianity to the words of Jesus and towards a more intimate relationship with deity. It also chronicles the construction of religious texts, a process I find fascinating. 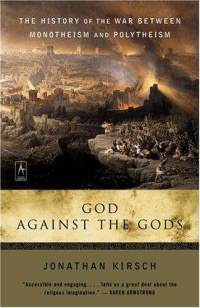 God Against the Gods: The History of the War Between Monotheism and Polytheism by Jonathan Kirsch is a lot like Jesus Interrupted in that there's nothing new in it, but what it succeeds at is taking ideas well known ideas in academic circles and breaking them down into something for mass consumption. Kirsch weaves together stories about Amenhotep IV, Josiah, and Julian the Apostate with ease, providing quick sketches of various points in history without sacrificing the important details.
I do think Kirsch's perspective is a little slanted, and he's on my side, but it's only a minor quibble. What I like most about Gods is how effective it is a launching pad. When you read the chapter on early Egyptian monotheism it creates a desire to read more about that time period. When reading about Asherah and her lover Yahweh I was inspired to read even more (detailed) information. (And certainly most people don't need more information than what Kirsch provides, I'm just a glutton for reading punishment.)
As a Pagan I also like reading about ancient pagan religions and how those paganisms were acted upon in the Ancient World. I've always been a big believer in trying to understand how the ancients viewed their gods, and a book like Kirsch's saves many of us the ordeal of slogging through academic books. One of my biggest criticisms of this book might be the extended title, there really wasn't a war between poly and monotheism. I don't think polytheism knew it was under attack until Julian the (Great) Apostate. For a more fascinating account on the war I recommend reading A.D. 381 and The Closing of the Western Mind by Charles Freeman. 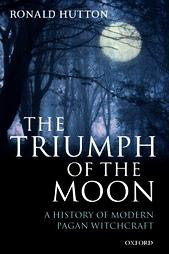 Ronald Hutton's Triumph of the Moon did in one fell swoop what's taken hundreds of years in Christianity to do: separate the myth from the reality. For decades the myth of Modern Witchcraft was that Modern Witches (Wiccans) were direct descendants of at least the witches persecuted and executed during "The Burning Times." Those witches then passed down a secret religion that was finally brought out of the broom closet in the early 1950's, obviously Hutton doesn't quite by this rather incredible sounding origin story.
The evolution of Modern Paganism that Hutton chronicles I find far more fascinating than the gallows history first articulated in the 1950's. In Triumph Modern Witchcraft emerges from a multitude of sources: Freemasonry, Romantic Poetry, Ceremonial Magick, Cunningcraft, and Archeology. Instead of a fictitious past, Hutton gives Paganism a solid footing in the real world, and writes about it with joy and a real energy that's usually absent from an academic work.
Despite critics in the Pagan Community, Triumph is not a demolition derby or "Anti-Pagan." There's nothing to be ashamed of when you can trace your lineage to Shelley and Keats. There are some problems with the book though. The second half, dealing more with Gerald Gardner and the earliest public Witches, would have benefitted from some more field research in the New Forest area (where Gardner first discovered Modern Witchcraft). Fortunately there's Wiccan Roots by Philip Heselton to fill in some of those gaps in Hutton's research. There are many Pagans still angry about Triumph, and I'll admit it's flaws, but I never thought that Hutton was trying to belittle our faith or tear down Paganism, in many ways a true understanding of our origins is a lift up.
*The real "savages" always went by the names of Pizarro and Cortez, but that's just my opinion.
at 3:39 PM