I am an altar whore. At my old house in Michigan I had eight or nine altars all over my house. Most of them were in my office,* now the majority are in my living room with one the in bedroom. I'm not sure when I first became infatuated with personal altar space. It might have been in high school when I decided to decorate my bedroom for Christmas. I didn't really do much in the way of decoration in retrospect, but I did prop up an old picture of Santa Claus (a Thomas Nast if that means anything to you), and surrounded that with a hint of tinsel and a very very tiny plastic tree. Since "Santa" is the unofficial deity of Christmas in some ways it was an altar to the Spirit of Gift Giving.
During college I began collecting Pagan things, and eventually had enough for a Pagan altar. My first altar was simply one of working tools: a few candles, an athame, a chalice, a tiny metal bowl that I used like a cauldron, some salt . . . There were no deity statues or anything like that, just bare bones tools. It wasn't very pretty but it was functional. Back then I did a lot of spellwork too, I was generally a neurotic mess constantly screwing up love spells and other crap, so that altar got a lot of work.
A few years later I began to stabilize as a human being and my focus totally shifted from spellwork. It became more like it is today: the constant pursuit of deity. To that end, my altar began to take on a different appearance. Instead of just working tools on the altar I began to build altars to specific deities/archetypes in order to get closer to them. Most of those archetypes I chose to get in touch with were the obvious ones: The Horned God, The Mother Goddess, etc. As time rolled around I kept up the altars to those powers, but added specific altars to Pan and Dionysus, one to just the Greek/Classical** gods, and even one to Jesus and his mama Mary which I thought needed "Donkey" from Shrek on it.
As I grew up my altars grew up with me. In Ari and Jason's more general living space I began creating seasonal altars for the both of us every couple of months. Most of those altars revolved around the seasons, but many of them were about specific holidays like Yule and (secular) Halloween. During football season we sometimes had a football altar up. My favorite one was generally the Spring Altar because we have matching Maiden and Goatboy statues, and of course we always position the Goatboy so he's chasing the Maiden (and despite cries otherwise, she does want to get caught). 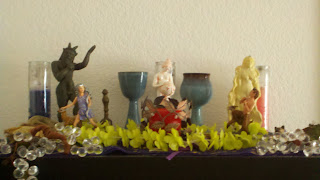 Due to space limitations in California the Goatboy and the Maiden stay up all year now and now occupy Ari and I's main altar in the living room. While I have many "unbalanced" altars my favorite altars are always "balanced ones." What is a balanced altar? Well it has an equal amount of Goddess and God on it, and also representations of all four elements (earth, air, fire and water). The deity choses here are obvious ones: Pan, Ariadne, and the two young lovers. More subtle is the figure in the middle which is the Goddess holding a balled up Green Man in her arms. That might be Ari and I's favorite statue right now. The four elements are represented with the chalices (his and hers!) for water, the bell for air, the candle in the middle for fire, and the flowers for earth. In our own style there are glass grapes on the altar too. Grapevines are all over our altars, it's a part of that whole "Craft of the Vine" thing we've got going on together. 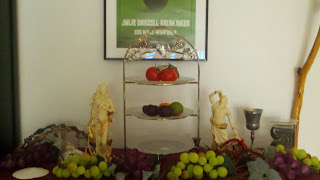 Our second main altar continues with the grape theme (these light up if you plug them in!) and features two of the four most important deities in our private (and soon to be more public) worship: Aphrodite and Dionysus. The three tiered cake holder was used at our wedding so it has special meaning to us, it also serves to remind us of the Earth's bounty since we put a lot of fresh fruits and veggies on it (and we kind of have to because of our tiny kitchen). The four elements are represented through an oil diffuser (air), candles (fire), chalice (water), and two sand dollars (earth). To the right is my stang (giant walking stick) and yes, that is a Led Zeppelin above the altar. 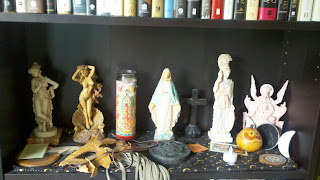 This is a very unbalanced altar, 100% male deity free. When Ari and combined all of our magickal things a few years my altars became our altars. One of her most cherished possessions is a very old Mary statue, so she sits in a place of prominence here. This altar also ended up getting a lot of my old Christian stuff, most notably the cross, but also Sophia the Goddess of the Wisdom who has set up shop in the corner. For some reason this altar has three pentacles on it, and a cat of nine tails for fire, but no other elements make an appearance. There is a Green Man mask on the left side of the altar, right below Aphrodite, so perhaps The God is here, sneaking a peak. 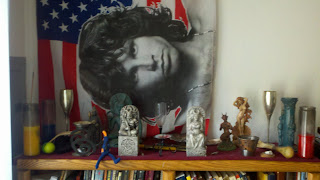 This is my most balanced altar, as long as you don't count Jim peering down from his perch on the American Flag. You've got two Bridgets in there, Aphrodite, Cernunnous, Kokopelli, and Pan. For the elements there are a few chalices, candles for each of the elements, a couple of rattles, a pentacle, and another oil diffuser. There's a small rock on the right that came from a Greek Temple in Turkey dedicated to Dionysus (a gift from a friend). This altar probably should be straightened up a bit, but since this one is "mine" it represents the frazzled state my brain has been in the last couple of months with the move.
The Goddess and God sit in the middle of this altar in their guises as the Horned God and Mother archetypes, and these two statues were probably Ari and I's favorite for a long time. Over the last couple of years we've become more "Hellenized" and more obsessed with Dionysus, Pan, Aphrodite, and Ariadne. I don't know if it's a sign of spiritual maturity or perhaps ego, but we've moved away from archetypes the last few years and into more concrete forms of deity. There's certainly still a place for the worship of archetypes in our practice, but we've just felt closer to gods with concrete names and myths lately. 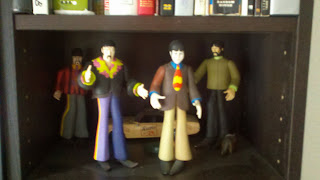 One of the best things about being married to Ari is that I ended up with a woman who has a good sense of humor. Perhaps The Beatles aren't "gods" but John was right, they were "bigger than Jesus" for a bit, so they get their own altar space at the house. Parked behind them is a Jim Morrison race car, I hope Jim's not driving. If there was ever a band with four distinct personalities it was The Beatles. You could make a case that Lennon was fire for his passion, Paul was water for his "Silly Love Songs," Harrison was obviously air, and Ringo as the drummer the representative of earth. Until we get Led Zeppelin or Doors action figures we'll make do with the "need to be dusted pretty badly Beatles."
There are a few other altars in the house, but nothing as obvious as these five, though one has Princess' ashes on it and a love letter from my Grandpa to my Grandma back during WW II. While those things are important to me, I might want to separate them, those moving into morbid "Death Altar" territory, and I'm usually too sunny for that.
Hope you enjoyed the swing through our altars.
*Yeah, in Michigan I used to have an office. In California I have either the back piece of the living room, or the "dining room" that's too small to have an actual dinner table in it (that's what the television upstairs is sitting on). I love California, but we pay double what we were paying in Michigan for half the space.
**Isis sat on there, but she was worshipped by some Greeks.
at 3:51 PM